An intercom, talkback or doorphone is a stand-alone voice communications system for use within a building or small collection of buildings,
functioning independently of the public telephone network. Intercoms are generally mounted permanently in buildings and vehicles. Intercoms can incorporate connections to public address loudspeaker systems, walkie talkies, telephones, and to other intercom systems. Some intercom systems incorporate control of devices such as signal lights and door latches. 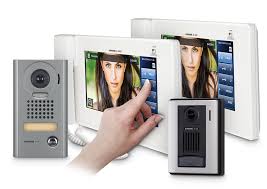 Master Station or Base Station – These are units that can control the system, i.e., initiate a call with any of the stations and make announcements over the whole system.
Sub-station – Units that are capable of only initiating a call with a Master Station but not capable of initiating calls with any other stations (sometimes called slave units).
Door Station – Like sub-stations, these units are only capable of initiating a call to a Master Station. They are typically weather-proof.
Intercom Station – Full-featured remote unit that is capable of initiating and receiving party-line conversation, individual conversation and signalling. May be rack-mounted, wall-mounted or portable.
Wall Mount Station – fixed-position intercom station with built-in loudspeaker. May have flush-mounted microphone, hand-held push to talk microphone or telephone-style handset.
Belt Pack – portable intercom station worn on the belt such as an interruptible feedback (IFB) with an earpiece worn by talent.
Handset – permanent or portable telephone-style connection to an intercom station. Holds both an earpiece and a push to talk microphone.
Headset – portable intercom connection from a belt pack to one or both ears via headphones with integrated microphone on a boom arm. Connects to a belt pack.
Paging Signal – An audible and/or visual alert at an intercom station, indicating that someone at another station wants to initiate a conversation.
Power Supply – Used to feed power to all units. Often incorporated into the design of the base station.